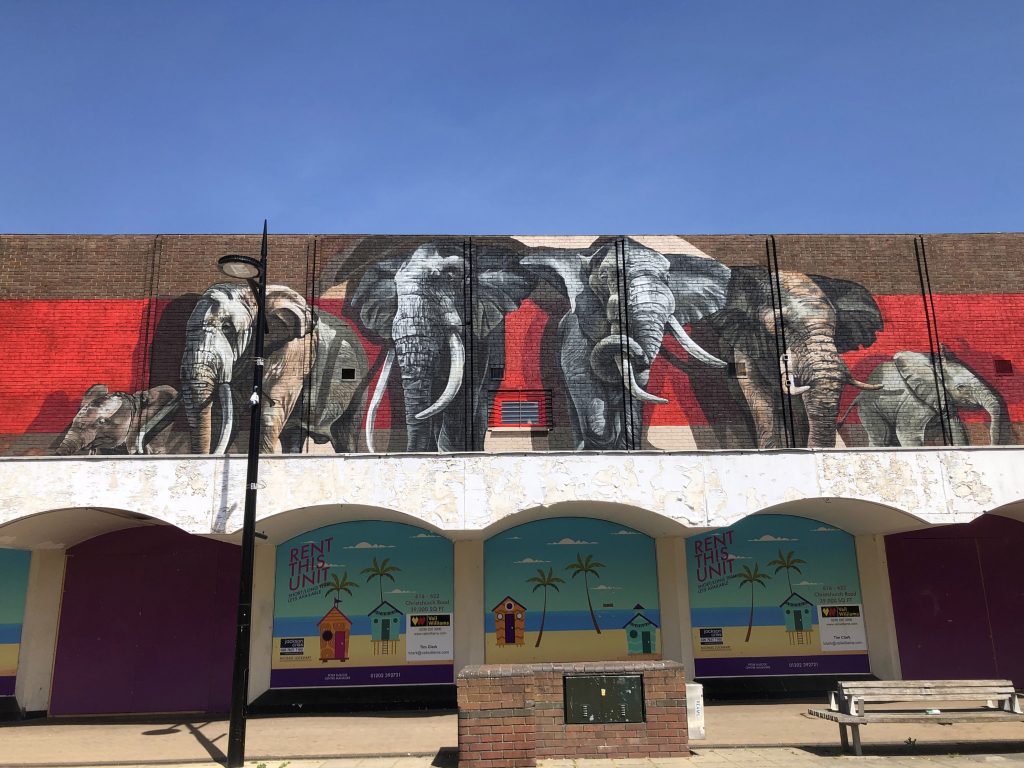 Boscombe High Street has been hit with a stampede of colour as a new large-scale mural, commissioned by Bournemouth Emerging Arts Fringe (BEAF), is unveiled on the front of the Sovereign Centre this week.

Boscombe High Street has been hit with a stampede of colour as a new large-scale mural, commissioned by Bournemouth Emerging Arts Fringe (BEAF), is unveiled on the front of the Sovereign Centre this week.

Aritst, Krishna Malla, commonly known as Tech Moon, was commissioned by BEAF to create the mural for this year’s BEAF festival. His much-celebrated mural last year, a large scale Dachshund that still remains in Boscombe, saw a huge response from the local community, including a group photo being organised in front of it featuring over 100 owners with their pet Dachshunds.

This year, Krishna’s mural has a poignant significance to the town. Looking back to the early 1900’s, travelling circuses such as the Royal Italian Circus, Billy Smart’s Circus, and Chapman’s Continental Zoo Circus are among a few that brought elephants and many other wild animals to the Hippodrome, now the O2 Academy, entertaining thousands of people annually. These majestic animals would be paraded down the high street between the shows, which in itself became an iconic event for the town.

This has become Krishna Malla’s inspiration for the new mural scaling 29m wide and 6m high, which features a herd of six elephants stampeding out of the front section of the Sovereign Centre. Due to its scale and detailed depictions, this iconic mural is already drawing huge interest from passers-by.

Krishna explains “I want this mural to celebrate the rich history of Boscombe, and this magnificent creature, yet draw attention to animal welfare. We can marvel and appreciate the beauty of creatures such as this, immortalised across some 30 meters of wall without having to ride them in foreign countries or watch them dance in circuses.”

Festival director Carol Maund continues, “As we had to postpone our festival this year, it was important to continue to support artists during lockdown and encourage creativity and the creation of art for the local community to enjoy. This mural has been part of a number of creative projects we have been delivering since the lockdown started. We want this mural to provide a much needed injection of positivity and celebration of the town’s history.”

Fiona McArthur from Bournemouth Coastal BID, which has been supporting BEAF, said: “Nothing quite turns the head like a herd of elephants.

“It is a magnificent sight and will attract visitors, which is what our retail areas really need when shops can re-open. It will also put smiles on faces.”

The mural also sits above the festival’s first pop-up venue Boscombe Arts Depot (B.A.D) that was previously the old TJ Hughes department store in the Sovereign Centre. Boscombe Arts Depot will act as the hub of the festival and will feature the first major exhibition in the building, 2B Human which includes new work from over 20 artists commissioned by BEAF as well as inspiring pieces from the festival headline artists William Kentridge and Stuart Semple.
Name the BEAF herd!

In celebration of the mural’s unveiling, the festival team are encouraging the local community to get involved in a number of elephant themed activities online, including make-your-own elephant at home for kids. The BEAF organisers are also calling on the local community to help name all six elephants of the herd. A poll has been set up on the BEAF website gotbeaf.co.uk and on their social media channels asking the public to share their top choices of names beginning with ‘B’. The top 6 names will be chosen after two weeks of voting.