The UK’s first permanent 3D projection mapping system on a UK high street has lit up Boscombe – thanks to Bournemouth Coastal BID.

Moving images are sent from the top of the Sovereign Centre to the building opposite, a surface area of almost 200 metres (650 square feet).

A three minute film extolling the benefits of Boscombe and the coast is currently running in the evenings.

The facility will be used to promote events and also give exposure to local artists and schools.

Supported by the Bournemouth Towns Fund, the projector is one way the Coastal BID is helping entice people back to shops and other businesses that are still recovering post-Covid.

Fiona McArthur, manager of the Coastal BID, said: “This is a UK first and really does stop people in their tracks.

“The system has 23,0000 lumens and the messaging is hard to miss. Locals refer to the place as BoscVegas, and now it is lit up just like the American town in Nevada it’s named after.

“This is just one way in which we are helping our areas – we have also funded Beryl bike rides for hotel staff and a green machine that collects food waste and cleans graffiti is also in operation.

“Following Covid and with an important summer season looming we want to promote what we have to offer and encourage people to visit.

“We’d encourage everyone to come and see the video that also has a sound track.”

It is run every half hour from 5pm – with the sound operating until 7pm.

The installation is the work of London-based LCI Productions. 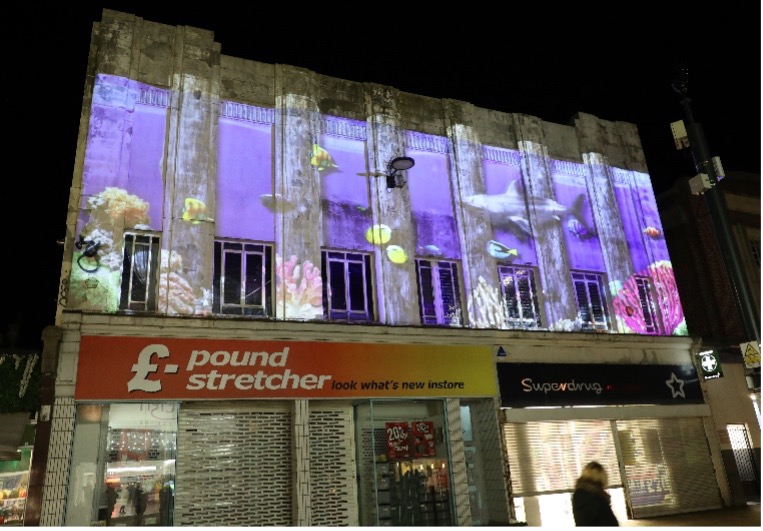 The Coastal BID runs from Westbourne to Hengistbury Head. It is one of two BIDs voted through by Bournemouth businesses in April 2012. In this ballot, 73% of those who voted supported the creation of the BID. There are 760 eligible businesses within the Coastal BID area, with a total rateable value of £30 million.

Business Improvement Districts, (BIDs), originated in Canada in the 1980s and quickly spread to the USA.

In January 2004 the Government introduced legislation which created the legal framework for setting up BIDs in Britain. To date over 185 have been established in the UK. They have been credited with halting and reversing the decline in many towns and cities. BIDs last for three or five years. Of the 87 that have come up for renewal, 78 have been voted in for a second term, usually with an increased turnout and majority. BIDs are successful!

BIDs work on simple principles. Businesses decide what projects they wish to undertake to improve the area and their profitability. Every eligible organisation contributes a small percentage of their business rateable value (usually around 1% or 2%). From these many contributions a significant fund is built up which has the power to make a real difference.

Based on a 1.5% levy the Coastal Districts BID generates a core income of c. £466,000. Because of the power of the BID it is possible to attract additional income through voluntary contributions and match funding for key projects etc.

BIDs make places more attractive and exciting to visit, reducing costs to participating businesses, increasing footfall and putting local businesses in control of the additional services which they have funded.