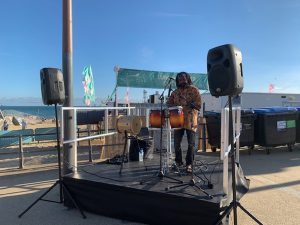 Fire-breathers and music acts will be performing on Bournemouth’s Pier Approach this Thursday (30th).

There will be three stages with numerous acts performing between 4.30pm and 8.30pm.

Fiona McArthur from the Coastal BID said: “We’ve tried to extend the length of the season for the benefit of our levy-payers and we’ve had a good September.

“The weather has been kind and we hope it remains so for this event on Pier Approach.

“There are all manner of entertainers performing on three platforms and the previous Coastal Vibe was extremely popular.

“We’ve organised a variety of events and we’ll be doing more through the autumn and in the run-up to Christmas.”

As well as fire-breathers there is an Ibiza chill-out sax player, a bongo act as well as an eclectic mix of other musicians.

It is being organised by Slick Events.